Illuminate yourself with joy, style, and design

Re +, Italian brand in the field of sustainable and innovative lighting, was present in the stands of HOMI in Milan, enjoying excellent success within visitors and those who worked in the exhibition. HOMI, heir to MACEF, is one of the biggest festivals on the national scene, dedicated to the world of home furnishings. Re + has exposed major projects in the area dedicated to Living Habits.

From 2014 MACEF, the traditional event dedicated to furnishings which is now held in the Milan Exhibition during the month of January, has changed its name, giving rise to HOMI.

Until the last year, MACEF had experienced a relatively modest success within the public, especially for the fact that the right of entry was reserved only to professionals in that industry. As a result, the general public has always regarded the show as a sort of complement to the Salone del Mobile.
For this reason, this year the organizers of the festival have decided to give the city of Milan, which in 2015 will host the Universal Exposition attracting attention from all around the world, a major exhibition dedicated to the world of design that is able to collect some success in terms of audience. MACEF was sent into retirement, and was replaced by HOMI : the exhibition dedicated to furnishings has been renewed : it was decided to devote greater attention to the person and his needs, to twenty-first century lifestyles and housing needs.

A reality in the field of design and innovation such as Re + could not miss an appointment as important as HOMI.
Re + participated in the exhibition by exposing two prototypes : Pinocchio, designed by fifth year students of the Industrial Design Course of Forli, and Galileo by students of the Art School of Bergamo, through the contest “Scenari di Innovazione”. 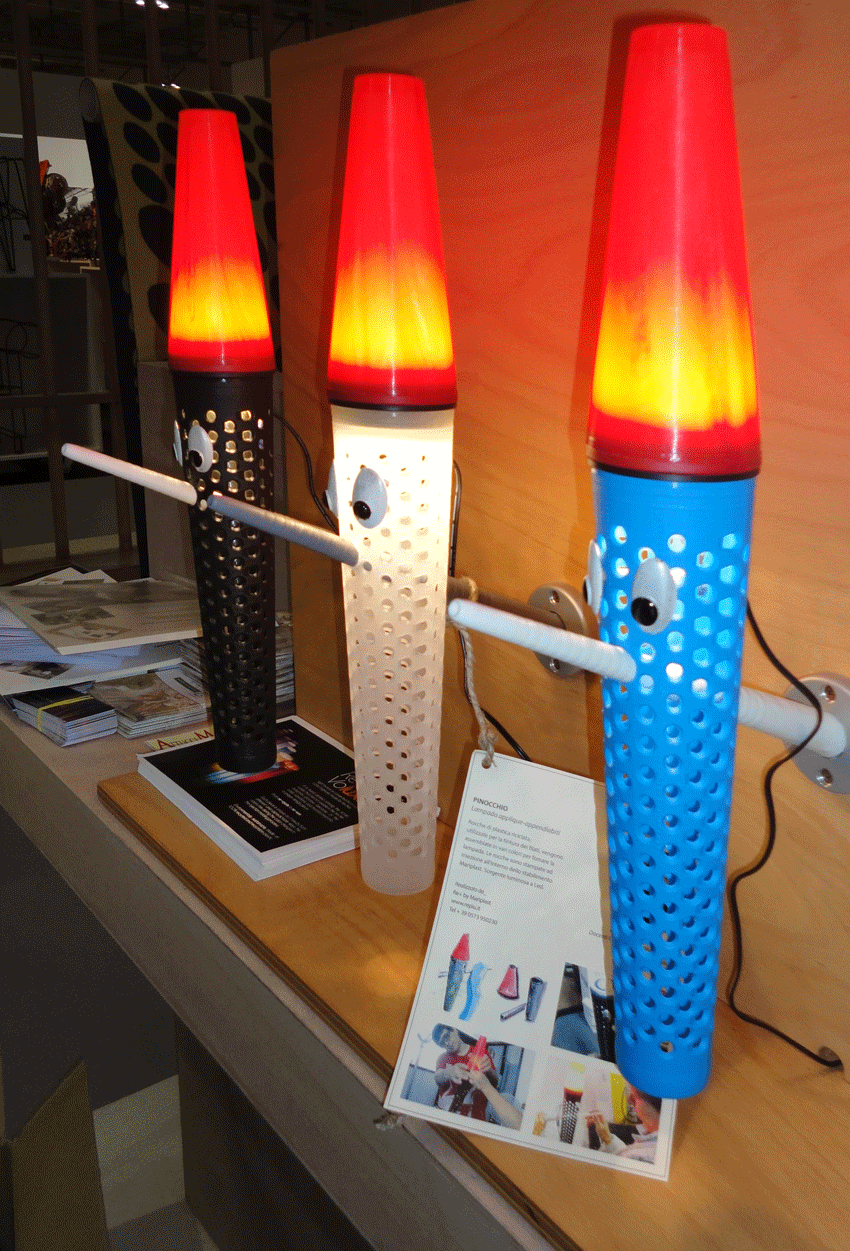 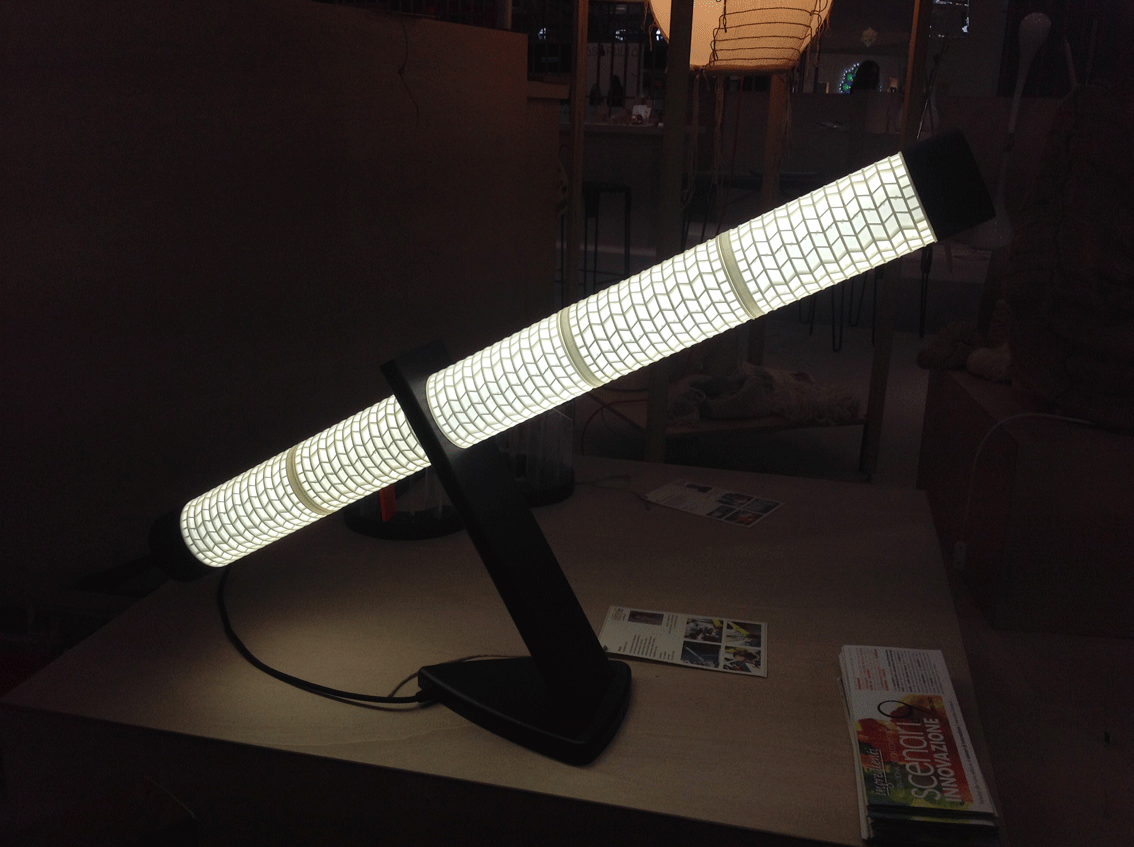 Pinocchio and Galileo are two unique products that meet the mission of  Re+ to create design products from waste or reusing the media for textile industry produced by Mariplast , a leader industry in that field for over 40 years. Rethinking the role of an already existing object, transforming it into something different: from yarn dyeing to enlightenment. Pinocchio is a light – coat hanger for children, which owes its name and feature to the famous fictional character created by the pen of Carlo Collodi; Galileo, instead, is a table lamp, named in honor of the great Tuscan astronomer, who was able to bring the light at a time when the darkness of superstition prevented any form of scientific, social and moral progress. The partnership between Re+ and Scenari di Innovazione denotes a great attention of the brand for innovation and the knowledge that only by believing in young talents and allowing them to grow professionally, a real progress can be achieved.

Feb
11
2014
Present at HOMI in Milan
Re +, Italian brand in the field of sustainable and innovative lighting, was present in the stands of HOMI in Milan, enjoying excellent success within visitors and those who worked in the exhibition.
Feb
11
2014
The inventors of Re Voluxion
Re+, brand italiano nel settore della illuminazione ecosostenibile e innovativa, è stato presente negli stand dell' HOMI di Milano riscuotendo un eccellente successo presso i visitatori e gli addetti ai lavori presenti nella fiera.
Nov
05
2013
Launch of the new Re+ e-commerce
Mariplast is pleased to present the new Re+ e-commerce, rich in contents and in design objects made ​​in Tuscany!
Nov
04
2013
The importance of a lamp within an environment
Discover Re+ table lamps, hanging lamps and light sculptures! Give life to your rooms with eco-friendly design objects.
Nov
03
2013
Sustainable lighting
Eco-friendly lamps with energy-saving and low CO2 emissions. Re + is lighting and environmentally respectful design.

From the forty years experience of Mariplast in the manufacture of plastic accessories for the textile industry, Re + was born, an Italian brand that offers innovative lighting systems. In collaboration with the designers and the architects Stefano Giovacchini, Sabrina Bignami and Alessandro Capellaro we make unique lighting with an alternative and contemporary style.

Terms and conditions
Become a dealer
Collaborate with us

For a tip or a question call or write to Re+ customer service.

This site collects anonymous statistical data on navigation through cookies installed by authorized third parties , respecting privacy of your personal data and in accordance with standards established by law . By continuing to browse this site , clicking on links in it or simply shaking the page down , you agree to the service and the same cookie .